Firstly, I do love my yoga classes, gym sessions, Barre and other random classes whether attempted by myself or with a partner in crime! There is – however, something amazing about being a part of a team sport.

Working Fly in – Fly out for over four years meant that I could never really commit to a team sport. I hated not being able to be a consistent team member and always felt like an outlier if I couldn’t make most games and training sessions. With the latest turn of events (all positive!) I have been able to reunite my love of team sports! Yay – go Me!

Currently, I play Soccer (Football as some of you will have it) and Netball. 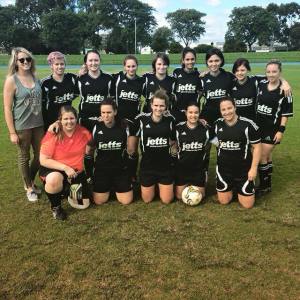 Before joining the two teams, I literally knew one other person on each team. I hadn’t played either sport for close to 6 years and knew I was in for a bit of a laugh…mostly at myself. Laughter was closely followed by frustration as I realized that ‘muscle memory’ didn’t switch on after just one game….I sucked! It’s like trying to play on monkey bars after years of inactivity. You remember swinging off them when you were young (soooo much fun!) and yet when you even try to hang off a rung when you’re an adult you soon feel; a) super heavy b) super weak and c) confused (this used to be so fun and easy!!!). That was me. Fully out of my comfort zone – Surrounded by people who have never met me before… Feeling like an absolute Muppet! ‘Sorry guys, I swear I used to be OK at this!’

As frustrating as this whole experience was, it wasn’t long before I remembered why I loved playing team sports…

So do you play a team sport? How do you get involved in your community? Are you like me and like to dabble in a bit of everything or are you loyal to just one way to sweat?

I would love to hear your thoughts! Where do you find your ‘me’?

Get Up to Date